Electric vehicles reduce emissions and also save money. Fueling with electricity offers some advantages not available in conventional internal combustion engine vehicles. Because electric motors react quickly, EVs are very responsive and have very good torque.  EVs are often more digitally connected than conventional vehicles, with many EV charging stations providing the option to control charging from a smart phone app. The charging station is supported with the synchronization and seamless mode switching control, so that the charger automatically connects/disconnects from the grid without disturbing the EV charging and household supply. For protection reasons, conventional charging stations are mandatory to shut down automatically at loss of grid. However, this multifunctional charging station is developed to establish to supply continuous power to the vehicles as well as to the consumer loads. In PV based charging station, extracted active power is shared between the load and the utility. Moreover, this charging station can be operated under outage of PV source and utility grid in V2H mode, which in turn increases the utilization factor of the charging station and it decreases the payback period of power converters. The charger is also enabled with the vehicle-to-grid active/reactive power support to the grid and vehicle-to-home power transfer for supporting the local loads in an islanded condition. 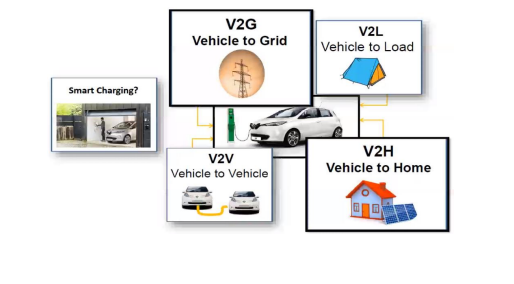 The grid integration of a PV array with an electric vehicle battery charging system is in demand due to higher fuel prices and cheaper PV modules, which has paved way for the fast development in the EVs, as the future mode of transport. Benefits of the proposed charging station are reduction in distribution losses, Bidirectional power flow capabilities (import or export power from the grid),No need of bulky magnetic circuits/transformers, Using Static Switches, the reliability of the charger is improved. Indirect Cost Reduction (By reducing losses and minimizing trips), Use of PVFFL (PV feed-forward loop) in current control mode, gives a novel power distributing concept between the PV array and utility. The charger is also controlled to operate as an active power filter for achieving the unity power factor operation and total harmonic distortion of the grid current within 5%. 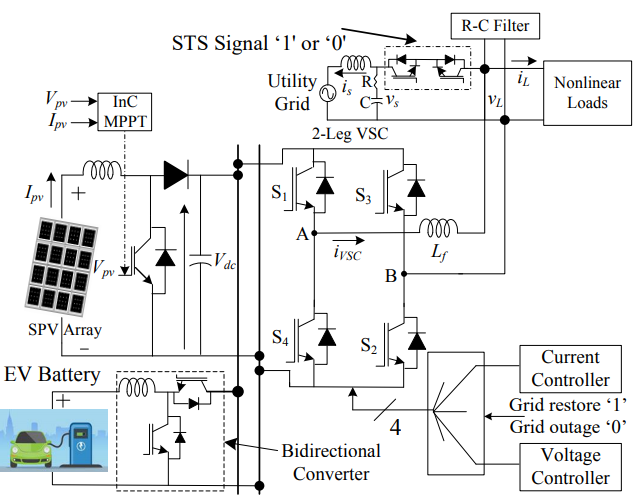 SyRM motor has been found quite suitable and reliable for electric vehicles application due to low cost, robustness, ease of operation and simple design than other AC motors. A charging station for EVs, Household Load and Grid under grid restoration and grid outage conditions has to be developed. The main feature of charging station is not only charging the battery bank, but it also feeds the power to the distribution network and mitigates the PQ problems. The system should show a satisfactory response under various disturbances. The charging station has to integrate with the grid effectively and should reduce the harmonics of grid currents and load voltages less than 5% under highly nonlinear load.

There are currently more than 20 different EV models on the market offered by a variety of manufacturers such as: